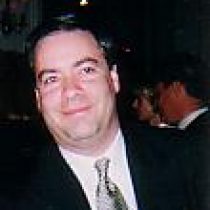 A man should be measured by the stories others tell, by his positive spirit, by the amount of “love left behind him.”

St. Mary’s Church was filled to capacity, with several dozen people standing throughout the service, as friends, family and local residents said goodbye to the 44-year-old killed last Sunday when he was hit by a truck in the breakdown lane on Rte. 128 in Weston.

“Bob’s passing is a reminder to us,” a reminder “not to put off expressing our love for one another.”

Though Turcotte’s life was cut short, it was “A Wonderful Life.”

“Just his name alone brought a smile to your face.”

The man nicknamed “Turk” was known for his energy and optimism.

“That boy could tell a story, and often loud enough to be heard at quite a distance,” said Lynch.

He was the kind of man who drove to the Cotton Bowl in a snowstorm in 1985, played a competitive game of pitch, was good with names “and great with numbers,” the kind who proposed to his wife, Sharon, via the scoreboard at the Boston Garden.

“He was larger than life,” said Lynch, and “he always made you feel you mattered to him.”

He was a mentor to many in the NorthStar youth hockey program, and an active supporter of youth sports in Holliston. Dozens of young mourners wore their hockey jerseys or Holliston athletic jackets to yesterday’s service.

Turcotte had worked as Massachusetts Bay Community College’s assistant vice principal for institutional development, director of athletic development at Northeastern University, and at Leave A Legacy, an organization to publicize the importance of charitable giving.

The Woonsocket native also led the fund-raising campaign to build the Ryan Center sports and entertainment complex at the University of Rhode Island.

He lived in Newton prior to moving to Holliston nine years ago.

A Newton firefighter played the bagpipe as Turcotte’s casket was taken to the church.

In addition to his wife, he leaves his children, Max and Abby, his parents, Robert and Linda Turcotte, three sisters and two nieces.

Donations in his memory may be made to the Turcotte Family Fund, c/o Bank of America, 747 Washington St., Holliston, MA 01746.

Robert Michael Turcotte “Turk”, 44, of Holliston, died from an auto accident on Sunday, January 13, 2008. Born in Woonsocket, R.I. he was the son of Robert A. and Linda A. (Chisholm) of Cumberland, RI. He was the husband of Sharon A. (Lynch) Turcotte of Holliston.

A Holliston resident for the past 9 years and formerly Newton, he was an avid sports fan, and involved with youth sports and many community activities. He was well known and loved by anyone who met him.

Visitation will take place on Friday, January 18, 2008 from 4-8p.m. at the Chesmore Funeral Home of Holliston, 854 Washington St. (RT. 16) www.ChesmoreFuneralHome.com A funeral mass will take place at St. Mary’s Church of Holliston on Saturday at 11:30a.m. Burial will follow in the parish cemetery. Donations may be made to: Turcotte Family Fund c/o Bank of America 747 Washington St., Holliston, MA 01746