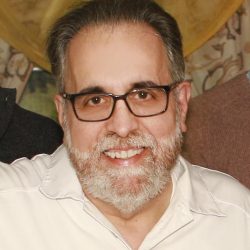 After a brave battle with cancer, Bob Christo passed away on December 18th at his home in Holliston. Bob passed away surrounded by family, including his beloved wife, sister and three children. He was 66. Robert Louis Christo was born on October 27, 1953, in Boston, the second child of Evelyn and George Christo.

As a child, Bob attended Boston Latin School, and enjoyed family picnics in Southbridge, MA, home to a large Albanian community. In 1976, not long after he enlisted in the U.S. Air Force, Bob married the love of his life, Christina Ellen Adams. After some brief postings stateside, the couple was stationed in West Berlin, Germany, where Sergeant Christo performed intelligence duties in the 6912th Electronic Security Group. He served in the USAF until 1980, then enlisted in the Air National Guard upon returning to Massachusetts. Bob and Christina eventually settled in Bellingham in 1985, where they raised their three children Stefanie, Brent and Jenn. After 33 years in Bellingham, they moved to Holliston in 2018.

Bob’s long stint with the U.S. Postal Service started in Southborough in the early 1980s. More recently, he managed the Fayville post office, developing strong relationships with his postal customers. For many years, he also worked for Middlesex Newspaper Company. A gentle and intelligent soul, “Papa” found joy in his children and grandchildren and his beloved New England Patriots. He also enjoyed playing his acoustic guitar.

Bob is survived by his loving wife of 43 years, Christina (née Adams); his sister Elaine Christo of West Roxbury MA; his daughter, Stefanie, son-in-law, Chris Wangler and granddaughters, Evelyn and Annalise of Natick; his son, Brent and daughter-in-law, Allexis Abdo, of Los Angeles CA; his daughter, Jennifer of Holliston; and his friends and extended family.

Memorial services are private. Donations in his memory can be made at the Bob Christo Memorial Fund, gf.me/u/w73ija Arrangements are under the care of the Chesmore Funeral Home of Holliston, www.ChesmoreFuneralHome.com