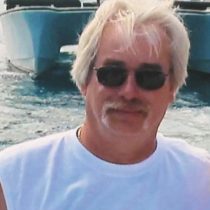 *Masks must be worn regardless of vaccination status.

Robert K. Bowles, 72, “Bobby” of Seabrook, NH passed away on Saturday, February 5, 2022 in the arms of his loving family after a lengthy illness with vascular dementia. He was the son of the late, George “Woody” Bowles of Boston and Margaret “Moore” Bowles of Connecticut. Bobby leaves behind his beloved wife, Susan Bowles of Seabrook, NH and their two sons and wives, Eric & Evy Nelson of Hingham, MA and Jason & Christine Nelson of Auburn, MA.

Bobby was born in Boston, Massachusetts and was a longtime resident of Natick, MA, graduating from Natick High School. He moved to Holliston and spent 35 years there and retired to Seabrook NH in 2012. Bobby worked in many capacities; installing police radios, mixing Pepsi-Cola at the Pepsi-Cola plant in Natick with his best friend, Dan Kelly, he worked on the Massachusetts Turnpike as a toll collector and retired as a postal clerk in Cochituate, MA. after 23 years, which was one of the happiest days of his life. He was the one who could fix stereo systems, set them up in no time, do taxes, and was an all-around TV expert.

He enjoyed sports, especially football and baseball. The Patriots and Red Sox were his favorites. Nascar was a passion for Bobby and he loved his trip to the Daytona 500. Bobby was an amazing father, always there for Eric and Jason, from Boy Scouts, pinewood derbys, baseball coach, and on the sidelines for both boys in baseball, soccer, hockey and football from elementary school through high school and college years. Bobby loved traveling to Texas, the Caribbean, Gettysburg, Canada, and mostly enjoyed the mountains and camping. The last 5 years he enjoyed vacationing in Florida for the winter with the Holliston gang. Bobby loved going to Old Orchard Beach and visiting his good friends, Joe and Sheila Rozanski. The mudslides were the instigator. “Bobbybaby” is a term of endearment for him, which started many decades ago. He was known for his kindness, soft-spoken way, his humor, and the way he treated people with respect and was never one to interfere unless requested to do so.  Bobby loved his family and friends so much and our world will never be the same without him.

Bobby belonged to the Charlesgate Yacht Club for twenty-four years in Cambridge, where he was Commodore for a year and remained a social member upon his death.  He also belonged to the Stoneybrook Association of Land Tenants, where he lived and was on the board as Marshall, ending his position in December.

Bobby is survived by his six beautiful grandchildren, Briella Nelson, Ayla Nelson, Michael Bailey-Gates and wife Stephanie, Christina Glynn, Jack Bailey-Gates, and Olivia Bailey-Gates.He leaves behind his sisters-in-law, Janet Routhier of Canada, Terry Lapworth & partner, Fred Joyce of Holliston, his brother-in-law, Bud Frost and wife, Roseann of Medway, sister-in-law, Cheryl Bowles of Nashua, NH, his nephew, Steven Bowles and wife, Lauren, of Danvers, and Kate Goudreau and husband, Pete of Natick, MA.  He also leaves his sisters-in-law, Diane Trowbridge of Colorado, Jackie Theken and husband, Jim, and Julie Davenport and husband, Todd of Texas. Bobby is predeceased by his brother, Tom Bowles, who he loved more than anyone, his sister-in-law, Judy Simonds; brothers-in-law, Arthur Lapworth, Claude Routhier, and Buddy Simonds. He leaves behind many amazing friends, nieces, and nephews, whom he adored.

Visitation will be held on Saturday, February 12th from 1:00-4:00 p.m. at the Chesmore Funeral Home of Holliston, 854 Washington St. www.ChesmoreFuneralHome.com A funeral service will follow in the funeral home at 4:00. Burial will take place at a later date. In lieu of flowers, expressions of sympathy may be made to the Alzheimer’s Association, alz.org or the Holliston Fire and Ambulance Associations, 59 Central St. Holliston, MA 01746