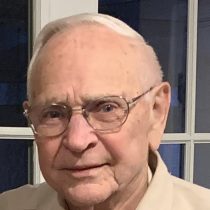 Robert Charles Hopkins, 94, of Holliston, passed away on Wednesday, June 1, 2022. Born in Cambridge, he was the son of the late Viola B. (Nichols) and Raymond S. Hopkins. He was the beloved husband of 68 years to Shirley Anne (Kent) Hopkins.

Robert was a veteran of World War II, where he served honorably as a United States Marine in China. He was proud of his service to America and was a past commander of the Holliston VFW, as well as a member of the Marine Corps League in Natick, the American Legion and Mt. Hollis Lodge. One of his honored memories was taking an honor flight to Washington DC. Bob was a man who deeply loved his family. He especially enjoyed cheering on his children and grandchildren in their sporting events. He was active with the Holliston Senior Center and enjoyed partaking in activities, such as bingo and scrap booking. He was a longtime volunteer for the Holliston Food Pantry and took pleasure in volunteering in the Holliston community.

Visitation Will be held on Monday, June 6th from 9:30-11:30 a.m. at the Chesmore Funeral Home of Holliston, 854 Washington St. A funeral home service will follow visitation at 11:30. Burial will follow in Woodlawn Cemetery in Wellesley. In lieu of flowers, donations may be made to the Holliston VFW or American Legion both at 310 Woodland St. Holliston, MA 01746,  or to Honor Flight New England, 193 Londonderry Turnpike Unit 4, Hooksett, NH 03106