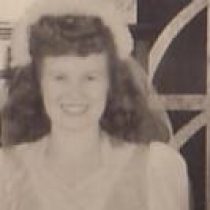 Rita Landers, 87, of Holliston, passed away Tuesday, April 1, 2008 at the Medway Country Manor. A Holliston resident for most of her life, she was the daughter of the late Stephen and Grace George.

She was Miss Holliston and the First Runner Up in the Holliston Apple Blossom Queen Contest in 1941. She had worked at the Orchid Beauty Salon in Framingham as a Hair Dresser until moving to Connecticut and raising her daughter. Rita then returned to Holliston in 1964 where she had worked at Interstate Photo for several years. In her retirement she enjoyed gardening, decorating and cats

She is survived by a daughter; Judith Ann Landers of Holliston, owner of Holliston Jewelers, a loving sister Doris Larnis and her children Debra and John Larnis of Framingham and a devoted brother; Stephen George and his family of Dorchester.

A memorial service will be held on Saturday, April 5th at 11:00a.m. in the First Congregational Church of Holliston 725 Washington St.. A reception will follow in the church hall. Arrangements are from the Chesmore Funeral Home of Holliston. www.ChesmoreFuneralHome.com Internment will be in Lake Grove Cemetery at a later Date. Donations may be made to the Holliston Pantry Shelf, 23 Water St. Holliston, MA 01746 or Heifer Project International, 1 World Avenue, Little Rock, AR 72202 www.heifer.org