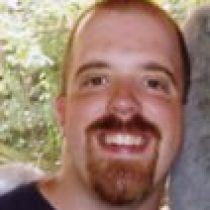 Richard McSheehan, 35, of Hopkinton, MA, passed away Monday, January 24, 2011 after his long battle with Brain Cancer. He leaves behind his beloved Fianc?e, Beth Woods, and her daughter Caylee, whom he considered his own.

He was born in Rochester, NH to Henry & Anita (Begin) McSheehan, where he lived until he graduated from NH College with a degree in Culinary Arts. Later he moved to MA, where he spent the rest of his all too short life working as an Assistant Bakery Manager for Shaw’s Supermarkets. Richard enjoyed cooking, sports, animals, and spending time with his friends and family.

He is also survived by his twin brother Robert and his wife Judith (McBride), his grandparents Roland & Mary (Foster) Begin, as well as three nephews and several aunts and uncles.

Richard was very proud to be chosen by Anthony Shepard to be his Godfather. He also leaves behind Beth’s family, which he considered his own, William and Rosemarie Woods, Jennifer Shepard and Dina Raneri, Michele and Joe Smalley, Kelley Woods, and all of their children.

Services will take place Saturday, January 29th from 11am-12pm at the Chesmore Funeral Home of Hopkinton, 57 Hayden Rowe St. A 12:30pm funeral home service will take place following visitation. Richard’s last wishes were in lieu of flowers, donations in his memory may be made to Dana Farber Brain Cancer Research at http://www.jimmyfund.kintera.org/customjf. He also requested that the color Grey be worn to the service to symbolize the fight for brain cancer.

A memorial service will be held in Rochester, NH at the cemetery in the spring.