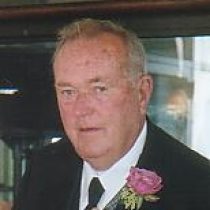 Hopkinton – Richard “Cook” Kumlin, 77, died unexpectedly March 4, 2004.
He was the husband of Doris (Nelson) Kumlin. They had been married for 51 years.
Born in Hopkinton and a life long resident, he was the son of the late David and Edith (Walker) Kumlin.
Cook worked for the Town of Hopkinton Highway Department for more than fifty years. He was currently and for many years a foreman for the department. Hopkinton is flying its flags at half staff in his honor.
He was an Army veteran of World War II, 87th Infantry Division, Pattens 3rd Army during which he received the Bronze Star and Combat Infantry Badge. He was honored with three battlestars; Rhineland, Central Europe and the Battle of the Bulge. He also received the Good Conduct Medal, European African Middle Eastern Theater Campaign Ribbon, American Campaign Medal and Victory Medal. He was a member of the Ashland V.F.W. and the Hopkinton American Legion.
Cook also served the Town on the Marathon Committee, enjoyed bowling, softball and other sports. He was a much loved member of the community and will be sorely missed.
Beside his wife he is survived by his son, David Kumlin and his wife Tambra of Lunenburg; daughters, Susan Hill and her husband Charles of Uxbridge, Janice Harriman and her husband Robert of Milford; brother, Ralph Kumlin of Seakonk; sisters, Caroline Davidge of Blackstone and Ruth Phipps of Hopkinton and four grandchildren, Corina, Charlie, Catherine and Rheanna. He was predeceased by his brother Paul and his sister, Mildred Perkins.
The funeral service will be held Monday, March 8 at 10:00 a.m. at the First Congregational Church, 146 East Main St., Hopkinton. The Rev. Richard Germaine will officiate. Burial will follow in Evergreen Cemetery in Woodville.
Calling hours, at the Chesmore Funeral Home, 57 Hayden Rowe St., Hopkinton, www.chesmorefuneralhome.com, will be Sunday from 1:00 – 4:00 and 7:00 – 9:00 p.m.
In lieu of flowers donations may be made to either the Hopkinton Library Building Fund, 13 Main Street or to the Doughboy Restoration Gift Fund, Selectman’s Office, 18 Main St., Hopkinton, MA 01748.