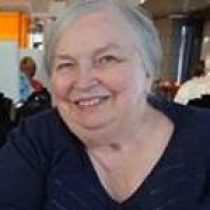 Phyllis Ann Phillips Leonard, beloved wife, mother, sister, and grandmother passed away Thursday, January 28, 2016 surrounded by her family. She was 83.
Phyllis was born on February 3, 1932 near Gatewood, Missouri to Anne (nee Everett) and Irvin Phillips. She attended the Doniphan public schools and was active in sports, winning the athletic award for her class. She was an excellent student and also played the french horn. Phyllis was a lifelong educator with a B.A. from the University of Missouri and an M.A. from Columbia University in New York. She had also completed the coursework for her PhD and had received a number of other certifications in various fields related to education.
Phyllis was married to George F. Leonard for 51 years (June 12, 1964) and is survived by him. She is also survived by her daughter, Mary-Ann L. Feller and son-in-law Mitchell S. Feller of Cortlandt Manor, NY; her grandchildren Elizabeth F. Feller and David H. Feller; her brother William W. Phillips and wife Barbara (nee Nuttall) of Pinehurst, TX; her brother Lloyd I. Phillips and wife Glenda (nee Wood) of Poplar Bluff, MO; and her brother Monte C. Phillips of Doniphan, MO. Phyllis was predeceased by her son John I. Leonard in 2005.
Phyllis loved children and was a truly gifted teacher who impacted the lives of thousands of students in school districts across the country. Her almost sixty year teaching career began in a one-room school in Ripley county in 1948 at the age of 16. She continued to teach throughout her life, working in a variety of school districts and settings as she followed her husband around the United States during his career in the Air Force. Phyllis and George eventually returned to her home town of Doniphan, MO where she continued to teach in the Poplar Bluff School System until she retired in 2007. Phyllis taught students in every age group including education at the college level at the University of Missouri, Washington University in St.Louis, the University of Southern California, and the University of California Los Angeles. Phyllis taught and held certifications in special education and as a reading specialist. She also spent a number of years as the Education Director at the Boys and Girls Club of Roxbury in Massachusetts.
Phyllis Leonard was a much-loved woman who was known for the respect and caring she gave to everyone. She loved her husband and her family deeply and unreservedly and was fiercely proud of her children and grandchildren. Phyllis was strong-willed and sharply articulate but was also a thoughtful listener who respected the opinions of others. She was an avid reader who particularly enjoyed history, biographies, and poetry, particularly the works of Robert Frost. She loved travel, art, music, and animals.
Phyllis always saw the potential in those around her and worked to help them rise to be their best. Through her love for her family and her incredible impact as a teacher, she leaves this world unquestionably better than she found it.
Phyllis requested that she be remembered in life and that there be no service at her passing. Donations in her memory may be made to Reading is Fundamental.
Arrangement From the Chesmore Funeral Home of Hopkinton. www.ChesmoreFuneralHome.com

Phyllis’ favorite poem by Robert Frost:
Stopping by Woods on a Snowy Evening
Whose woods these are I think I know.
His house is in the village though;
He will not see me stopping here
To watch his woods fill up with snow.
My little horse must think it queer
To stop without a farmhouse near
Between the woods and frozen lake
The darkest evening of the year.
He gives his harness bells a shake
To ask if there is some mistake.
The only other sound’s the sweep
Of easy wind and downy flake.
The woods are lovely, dark and deep,
But I have promises to keep,
And miles to go before I sleep,
And miles to go before I sleep.
Phyllis’ travels are done and she has earned her rest.