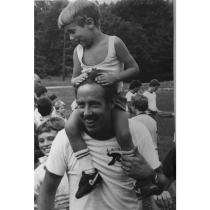 Celebrations of his life will be held in the summer

Paul Schuyler Pilcher passed away peacefully on January 28, 2018, surrounded by his children, Jennifer, Katie, and Douglas, and his beloved husband, Daniel.

Paul was born in West Newton on March 7, 1945 to Lewis Stephen Pilcher II and Eleanor Walker Bogart Pilcher. He joins his parents, two brothers, Lewis Stephen Pilcher III and David Bogart Pilcher, and sister Nan Pilcher Frymoyer, in peace on the other side. Known as “Popeye” in his later years, his spirit lives on through his husband, children, grandchildren, nieces and nephews, alumna and countless friends.

Paul achieved the three pillars of a happy life: Joy, Success, and Love.

Paul talked about crying with joy when he held each of his children for the first time. He reminisced with a twinkle in his eye about funny things his children did when they were little. Paul experienced immense joy seeing each of his children graduate, get married, and become parents. He took pride in welcoming his son-in-law, Jason Knowles, and daughter-in-law, Lucy Pilcher, to the family. As a grandfather, Popeye shared his humor and love of life with his four grandchildren, Kaitlyn, William, Alex, and Milo. Popeye’s face lit up any time he was around them, and any time he talked about them. He loved his life in Wellfleet, MA, having 20 years of retirement in his treasured place, doing his three favorite things: sailing, playing tennis/pickleball and watching the Red Sox. Paul dreamed of this retirement since he was a child sailing in Wellfleet Harbor with his siblings and father, his mother watching from the beach.

Paul achieved success in whatever he put his mind to. He was an intellectual and a brilliant mind with a photographic memory. During his years as Director of Lanakila, Paul remembered the names of every camper and parent, without hesitation. In his professional life, he reinvented himself multiple times- from teacher, to Headmaster, to Camp Director, to Attorney, to retiree and Wellfleet select board member. Throughout his life, supporting and advocating for under privileged children and families was a persistent theme. On the day he fell ill, Paul was on his way to play pickleball and then get on a plane to Washington, DC to lobby for the dredging of the Wellfleet Harbor. Wherever he went, his passion and dedication to his cause was obvious.

The final piece of the puzzle in Paul’s life was the love of a true partner. In 2009, he met Daniel Alexander Lawson. They were married September 15, 2012. In meeting Dan, Paul achieved the three pillars to a happy life. In the years since, Paul was at his happiest and best, reinvigorated with life, and a full heart. Together, in their communities in Wellfleet and White Point, Nova Scotia, Paul and Dan thrived. With dogs Biscuit and Fenway by their side, they sailed, traveled, and spent time with family and friends. They welcomed new grandchildren into the world and anticipated the arrival of more. They reveled in the joy and successes of their children and grandchildren, and the love of their family.

Paul Schuyler Pilcher passed away peacefully on January 28, 2018, surrounded by his children, Jennifer, Katie, and Douglas, and his beloved husband Daniel. He lived a wonderful life.

Celebrations of his life will be held in the summer, as this was his favorite time of year. Donations can be made to The Aloha Foundation in Fairlee VT, in Paul’s name, for scholarships for under privileged youth. As well, a fund is in development for the support of the Town of Wellfleet, details to follow.