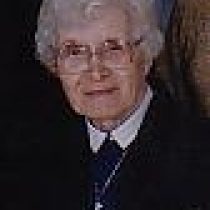 Patricia Verra Rousseau, 83, of Holliston Died Friday August 15, 2003 at the Metrowest Medical Center of Framingham. Born in Albania, Patricia is the daughter of the late Naum and Vasileka (George) Vangel. She was also the wife to the late Anthony Verra who passed away in February of 1967.

Visitation Hours will be held tonight August 17, 2003 from 5 to 8 PM at the Chesmore Funeral Home, 854 Washington St. (Rt 16), Holliston, MA A Funeral mass will be on Monday August 18, 2003 at 10:00 Am in Saint Mary’s Church of Holliston. Burial will Follow at Dell Park Cemetery in Natick. In lieu of flowers memorial contributions may be made in her memory to Metrowest Cancer Care Center, 99 Lincoln St., Framingham, MA 01702