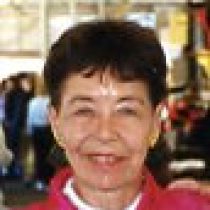 Patricia Irene Vonachen, 81, of Holliston, passed away peacefully surrounded by her loved ones on Thursday, April 22, 2009 at the Wingate at Sudbury Nursing Home. Born in Ohio, she was the daughter of the late William Henry and Alice (Mahar)Burton. She was the wife of Robert C. Vonachen.

Patricia lived a very active and fulfilling life and was committed to her church and community. Her greatest importance was her family and raising her children; this always came first. After her wedding on February 9, 1952, she and Bob raised her cousin – Judy (Mahar) Tangeman whom she considered as a friend and daughter.

She was raised and completed HS in Elyria Ohio. She was a an avid athlete and member of the Alpha Delta Pi Sorority at Purdue University where she was on the Tennis team and was also a majorette. She was a dedicated grandmother and was passionate about her grandchildren.

After moving to Holliston in 1966 she became active in the Saint Mary’s Church and Fatima Shrine as a Deacon and a reader. She was active in many other community groups such as the Holliston Food Pantry, PTA, Scouts and was an avid walker, who could be seen walking around town. She worked in the Holliston school system and was also a dental hygienist in Ohio. Her passions included walking, biking, golf and cross country skiing

Besides her husband, she is survived by 1 son, Bill Vonachen and his wife Lori of Framingham; 2 daughters, Molly Dillon and her spouse Carol Webb of Hull, and Laurel Rapp of Loveland, CO.; Judy Tangeman of Hanahan, SC. She also leaves behind 5 grandchildren, Connor, Katie, Colby, Caroline and Mitch. Plus Judy’s children – Craig and Linda.

Visitation will be held on Sunday, April 26, 2009 from 2-5pm at the Chesmore Funeral Home of Holliston, 854 Washington St. (Rt. 126) www.ChesmoreFuneralHome.com A funeral mass will be celebrated on Monday at 10:30a.m. at St. Mary’s Church of Holliston. Burial will follow in the parish cemetery. In lieu of flowers, donations may be made to the St. Jude Children’s Research Hospital 501 St. Jude Place, Memphis TN 38105