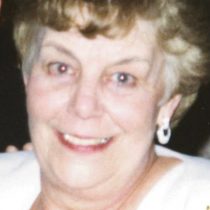 Patricia Helen Clancy, 82, formerly of Holliston, passed away peacefully on Monday, March 29, 2021 with her children by her side. Born in Boston, she was the daughter of the late Helen (Murphy) and Charles Gillon. She was married to the late John L. Clancy for 50 years.

After losing her parents at 10 and 14 years of age, Patricia was raised by her aunt Marion Murphy (Mamie) in Hopedale. She was a graduate of Annhurst College then worked at the Dennison Corporation in Framingham. A blind date with a young man from Holliston in a VW Beetle led to marriage two years later. John and Pat moved to a new home on Oakridge Road in Holliston, where they raised four children and lived until John’s death in 2014. In Holliston, she built a home full of laughter and love. While setting high standards, she understood the benefit of letting her children miss an occasional day of school and the healing power of humor, ice cream, hugs, and a good cup of coffee. She was happiest when surrounded by her family, whether around the dinner table, sharing stories, or playing cards.  She had a gift for making everyone around her feel comforted and special, from crying babies to grown adults. Her magnetic personality and infectious laugh will be remembered by all who knew her.  Pat was exceptionally proud of her four children and ten grandchildren, who became the center of her life.

A funeral mass will be held on Thursday, April 1st at 11:00 a.m. at Saint Mary’s Church of Holliston. Burial will follow in the parish cemetery. Arrangements are under the care of the Chesmore Funeral Home of Holliston, www.ChesmoreFuneralHome.com