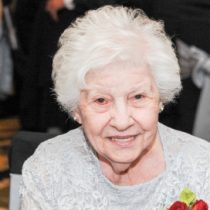 *The family kindly asks that masks be worn, thank you

Pasqualina Maria Neri, 100 years old, passed away peacefully in her sleep at Genesis-Milford Center on Tuesday, June 14, 2022. Born in Casalvecchio Di Puglia, Italy, she was the daughter of the late Angiolina (Niro) and Matteo D’Aloia. She was the beloved wife to the late Aldo Neri.

At the young age of 10 years old, Pasqualina immigrated to the United States, first living in Pawtucket, RI followed by her long residency in Framingham, MA and eventual retirement in Medway, MA.

As a devout Catholic, her faith and her family were the two most important parts of her life. She enjoyed cooking big meals for family dinners and holidays, as well as spending quality time with her family. Pasqualina also had a passion for sewing, which she was able to put to use in her work – from working at a factory making military hats during WWII, to working in a factory sewing aprons, to working for the House of Bianchi making bridesmaids gowns up until her retirement. From there, she began assisting with the childcare for her two grandchildren.

In 2010, Pasqualina traveled back to Italy for the first time since moving to the United States back in 1932. She was able to reunite with family she had not seen in 78 years on this trip of a lifetime. To be able to take a trip back to the small town where she spent her childhood, which she remembered so vividly, was an experience that she could never forget.

Pasqualina (fondly known as Bamma) is survived by her daughter, Mary Pauly and her husband John Pauly Jr., of Medway. She also leaves behind two grandchildren, Stephen Pauly and his husband, Christopher Dinan, Leanne Murphy and her husband, Daniel Murphy, along with two great-grandchildren, Emma and Grayson Murphy. She is predeceased by two brothers, John D’Aloia and his wife, Fioralba and Michael D’Aloia Sr. and his wife, Rose. She also leaves behind many nieces and nephews.

Visitation will be held on Tuesday, June 21st from 4:00-7:00 p.m. at the Chesmore Funeral Home of Holliston. A funeral Mass will be celebrated on Wednesday, June 22nd at 10:00 a.m. at St. Tarcisius Parish 562 Waverly St. Framingham. Burial will follow in the Parish cemetery, 180 Winthrop St. The family kindly requests that masks be worn. In lieu of flowers, donations may be made to www.kidneyfund.org www.StJude.org or to your local food pantry