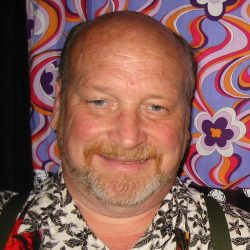 Neil Brian Canney, 68, of Sherborn (aka “Bear”, “Bearface”, “Mr. Spatial Relations”,  and known to possess a “brain as big as a planet”) passed away Monday, December 2, 2019.  He is survived by his wife of 49 years, Eleanor “Abbi” Pugh Canney of Sherborn; daughter Katherine Canney and daughter -in-law, Jude Zmolek of Sherborn; son Christopher Canney and daughter-in-law, Mary Klecan and grandchildren Theodore, Charles, Josephine and Ruth of Holliston; brother John F Canney of Cohasset and a large extended family.  He is preceded in death by his brother Bruce K Canney and parents, John J and Marjorie Canney.

Neil was a longtime resident of Needham and relocated to Sherborn in 2012.  In 2013 he survived a serious head injury in a car accident which began a long decline in health, ending with Lewy body dementia.  He died at home under the care of his family, who were helped by many wonderful in-home carers.

Neil was an artist, musician, craftsman and notorious do-it-yourselfer.  He studied art and design at the School of the Museum of Fine Arts, but left before graduating. He then went  to work as a union pipe-fitter, following in the footsteps of his father. Eventually he switched careers to become a carpenter and home builder. He ran a successful construction company with his brother Bruce, son Chris and nephew Isaac designing, building and remodeling high-end homes in the suburbs around Needham. He approached each new house as an art project and never settled for cookie-cutter designs or cheap finishes. Neil firmly believed in the value of hard work and took a hands-on approach to every project. He especially relished any job that took him outside his comfort zone and provided an opportunity to buy a new tool or develop a new way to solve a problem.  Neil was a founding member of the Zoomite Defense League and made certain to mark every construction project with the sacred ZDL and crossed shovel symbol behind any built-in cabinets or other out-of-the-way areas.

From his teenage years on, Neil was a dedicated musician and music lover. He played the keyboards, organ and twelve string guitar in several bands made up of family members and friends. For over 30 years the bands met weekly at the Canney house in Needham for extended Sunday night “tunes” and only occasionally came to the attention of the Needham Police Department.  From childhood, Neil was an avid skier and spent winter weekends and vacations traveling to all parts of New England and beyond to ski with family and friends. Neil also loved to fresh-water fish, and spent long afternoons and evenings paddling about Hermit Lake chasing giant pickerel and losing lures in the weeds.  He was a great proponent of sleeping-in and enjoyed staying up late working on music or plans with occasional breaks for a nap in his recliner with the TV on.

After the car accident, Neil’s world shrank to the little ranch house in Sherborn, but he continued to make jokes, play with his grandchildren, and thoroughly enjoyed a good chocolate frappe or whoopie pie. He still loved music and could sometimes muster the energy to play a few of the old tunes he loved with his one and a half working hands. He was stubborn and didn’t like to give up or ask for help too often, but he was also kind, generous, patient and funny. He deeply loved his family, friends and helper-dog Nomie, who disappeared into a snow storm on the night of his death.

A celebration of Neil’s life will be held on January 12, 2020 from 3:00 – 7:00 at the Unitarian Universalist Church – Parish Hall in Needham. In lieu of flowers, please send donations to the Plugged-In Teen Band Program. In Zoom We Trust. Arrangements are under the care of the Chesmore Funeral Home of Holliston.