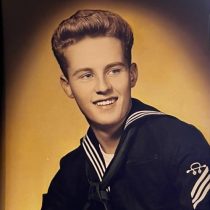 Michael Joseph Banks, 86, of Medway, passed away at his home surrounded by his family on Thursday, March 31, 2022. Born in Boston, he was the son of the late Margaret (Tower) and Charles Banks. He was the loving husband of 68 years to Robin (LaTorraca) Banks of Medway.

Michael was a graduate of Northeastern University, where he earned a Bachelor’s degree in Engineering. He took pleasure in his work as an engineer at Raytheon. Michael proudly served in the United States Navy as a Submariner during the Korean Conflict. He will be remembered for his great devotion to his wife, the joy he experienced when spending time with his sons, grandchildren, and great-grandchildren; his funny sense of humor, and most importantly his kindness.

A funeral service will be held on Thursday, June 2nd at at 11:15 a.m. at the Massachusetts National Cemetery in Bourne. In lieu of flowers, donations may be made to VNA, vnacare.org or 120 Thomas St., Worcester, MA 01608