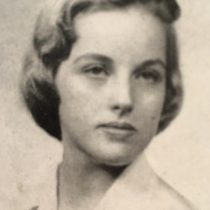 Melinda Ann Hitchcock DePorte, age 77, of Hopkinton, MA passed away on Monday, December 19, 2016. Melinda was born on June 18, 1939 in Glens Falls, NY to Patricia Blake Hitchcock and John Dayton Hitchcock. As a child she enjoyed playing with her brothers in their sandbox, which her father filled with real seashore-sand. She performed plays on her porch with her friends, designed and water-colored clothing for her paper-dolls, and read lots of books. She liked watching her brother Peter sell candy from the front-yard “store” he made from orange crates, and eating Peter’s candy bars with her brother Chris. Melinda also took pleasure in being a bit rebellious, climbing the forbidden maple trees in the yard, sliding down the snowy hills of the school yard across the street past her 5:00 p.m. curfew, and engaging in teasing with her brothers.

Melinda was incredibly supportive of her daughters, encouraging them to pursue their interests. She ensured that her daughters were provided many cultural and educational opportunities, including theater, opera, classical music, and regular readings from the encyclopedia at dinner time –when they would have much preferred watching Beverly Hillbillies. Melinda was an excellent cook and valued good nutrition. This meant that Cathy and Becky did not get to learn the pleasure of white bread, or Chef Boyardee, or desserts after dinner. Melinda assured them that if they drank Coca-Cola their teeth would rot and Becky tested this by putting one of her baby teeth in a Dixie cup of Coke. Melinda was right.

In recent years, Melinda lived in a wonderful assisted living community, Golden Pond, where she was elected to be president of the resident council. She swam at the local YMCA, participated in activities at her residence, read, wrote, listened to public radio and music, and spent time with friends. She was especially pleased about her weekly visits from her daughter Cathy and said that this past Mothers’ Day, spent with both Cathy and Becky, was the happiest day of her life.

Melinda loved being with her grandsons, Matthew and Jesse. She enjoyed all children, reading to them and listening to them. She was a story-writer and a story-teller. Often she told stories about her children, her grandchildren, her nephews and niece, or the children she worked with at the daycare centers. She wrote stories for children, including two favorites, “Bella the Raindrop” and “Gus the Greedy Octopus.” She also wrote poetry (including one poem that was published) and was working on her memoir.

Melinda was a warm, kind, generous person who always looked out for those less fortunate or who might just need someone to listen or provide a hug. When she lived in Boston, she’d walk through Harvard Square and empty her wallet into the hands of street people who she knew by name.

Melinda is survived by her daughters and their husbands, Terry Robinson and Cooke Harvey, her brothers, Peter and Christopher Hitchcock, her grandsons Matthew and Jesse Robinson, her Aunts Elizabeth Barron and JoAnn Blake, her nephews Ted, Dan, and Jonathan Hitchcock, her niece Katy McManus, and many cousins and dear friends –all of whom she loved deeply. She was predeceased by her children’s father, Michael, and her beloved dogs Finny and Sam. However, she is now with them telling stories and grumbling about how her parents never got her that chemistry set she wanted when she was nine.

A celebration of Melinda’s life will be held at Golden Pond, 50 W Main Street, Hopkinton, MA at 2 p.m. on Sunday, January 15th. In lieu of flowers, contributions in Melinda’s memory may be made to the charity of your choice. Arrangements are under the care of the Chesmore Funeral Home of Hopkinton.