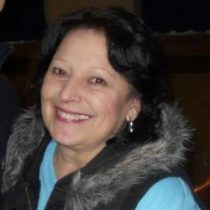 Marylou “Mary” Patricia Russo, 68, of Framingham and formerly of Holliston, passed away on Wednesday, August 24, 2022. Born in Wellesley, she was the daughter of the late Patricia (Gallo) Rogers Stafford and Robert Rogers. She was the wife of 25 years to the late Joseph Russo.

Mary’s favorite season was Fall. She loved to garden and enjoyed time spent outdoors. She loved the beach; especially the beaches in Ogunquit, Maine. She was an avid fisher and boater and took pleasure in traveling and cooking. As a former nurse, Mary was a caretaker for many and was always helping others in need. Most importantly, Mary’s cherished life’s work was her role as a mother and grandmother.

Mary is survived by her two children, Melissa Sylvester and her husband, Michael of Westborough  and Joseph Russo of Framingham. She also leaves behind her siblings, Stephen Rogers and his wife, Cari of Holliston, Robert Rogers and his wife, Kathy of Milford; four grandchildren, Jordyn, Joseph, Anthony and Dominic, as well as her brother-in-law, William DiDonato, many nieces, nephews, cousins, friends and her beloved dog, Jake. She is predeceased by her sister, Cynthia DiDonato.

Visitation will be held on Sunday, August 28th from 4:00-8:00 p.m. at the Chesmore Funeral Home of Holliston, 854 Washington St. www.ChesmoreFuneralHome.com A funeral Mass will be celebrated on Monday, August 29th at 11:00 a.m. at Saint Tarcisius Parish, 562 Waverly St. Framingham. Burial will follow Mass in the parish cemetery, 180 Winthrop St. Framingham. In lieu of flowers, donations may be made to Dana Farber Cancer Institute, dana-farber.org or P.O. Box 849168, Boston, MA 02284.