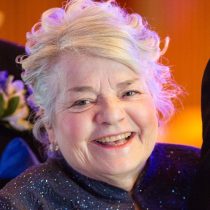 To view the Funeral Mass, please visit the link below

Maryellen Connors, 72, of Holliston, passed away at Milford Regional Medical Center on Wednesday, April 13, 2022 after a long battle with lymphoma. Born in Milford, she was the daughter of the late Esther (Foley) and John Milan. She was the wife of 33 years to the late James Connors who passed away in 2007.

Maryellen worked for over 40 years as an O.R. nurse at Newton Wellesley Hospital. She enjoyed summers in Cape Cod, attending high school reunions and ASHES conferences, and spending time with friends and the nursing community. Most importantly, Maryellen loved time spent with her family, especially her grandchildren.

Visitation will be held on Monday, April 18th from 4:00-7:00 p.m. at the Chesmore Funeral Home of Holliston, 854 Washington St. www.ChesmoreFuneralHome.com A funeral Mass will be celebrated on Tuesday, April 19th at 9:00 a.m. at Saint Mary’s Church of Holliston. Burial will follow in the parish cemetery. In lieu of flowers, donations may be made to the American Cancer Society, cancer.org