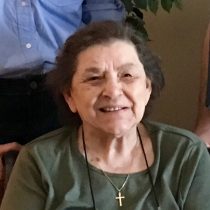 Mary Theresa Miller, of Melbourne, Florida and formerly Holliston, passed away on her 93rd birthday, December 16, 2018. Raised in Chelsea, MA, she was the daughter of the late Mary (Bernard) and Leo Boudreau, and was one of ten siblings. She was married to the late Andrew G. Miller for 63 years, and was the mother of ten children.

Mary received her R.N. from the US Army Cadet Nursing Program at the Catherine Laboure School of Nursing in 1946. She worked as a registered nurse for nearly forty years at the former Peter Bent Brigham Hospital, Boston, and St. Patrick’s Manor, Framingham. She was on the nursing staff that accomplished the first successful kidney transplant in the United States. Mary was an active member of St. Mary’s Church in Holliston for over 50 years, where she served as a Eucharistic Minister, Religious Ed. instructor and participated in many social and faith formation programs. She was an enthusiastic Red Sox and Patriots fan and cherished her faith and family.