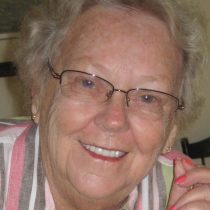 Mary Jay McCabe (nee Downs) of Westborough, MA, Jupiter Fl and Southampton, NY, died April 23 at The Willows, Westborough. She was 87. Mary Jay was the daughter of Robert and Maude (Burnett) Downs of Southampton. Beloved wife of Bob McCabe and mother to daughter Lou Ann and son Stephen.

Her family origins go back to the original settlers of the Village of Southampton, NY, and her childhood home on Wickapogue Road was deemed the oldest farm house in New York. It also was one of the first to have electricity in the village. During her early years, she was an energetic member of the Girl Scouts and achieved the Curved Bar award, one of the highest honors given. After graduating from Southampton High School, she attended Becker Junior College in Massachusetts. While at the College, she met her future husband. Upon her graduation they were wed in Southampton and began their married life in Worcester, MA. Within a year, they moved permanently to Southampton, NY where they literally built their home, near her parents and brothers. With her husband, then a Suffolk County Sheriff and volunteer fireman, they raised their two children. Together they spent many happy years traveling across the United States.

Always energetic, Mary Jay continued in her service to the Girl Scouts and other local organizations. She also volunteered at Southampton Hospital. Following the death of her husband, Mary Jay became a snow bird, residing most of the year in Jupiter, Florida. She was an excellent tennis player, enjoying the competitive nature of the game. Her other interests included playing bridge and mah jong. She also continued her love of travel. Her many trips took her to Hawaii, Australia, France, and Germany. She is survived by her daughter, Lou Ann McCabe.

Services are being held privately and are under the care of the Chesmore Funeral Home of Holliston.