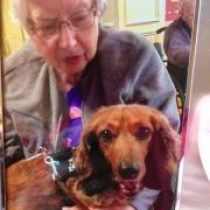 Mary was a graduate of Jefferson Nursing College in Pennsylvania. While staying home during the day to raise her children, Mary occasionally worked as a nurse during the evenings. After her children were grown, she returned to full-time nursing, working for the American Red Cross in the Worcester unit. Mary loved animals, especially her dachshunds, which she raised for many years. During her younger years in Holliston, Mary enjoyed walking each day to feed apples to the horses at a local horse farm. She enjoyed vacationing at her condo in Panama City Beach, FL,and in her later years, she became an avid Red Sox fan.

Mary is survived by two sons, John H. Carter, III of Abingdon, MD, Jim Carter and his wife Teresa of Forest Grove, OR, and one daughter, Jane Hakanson and her husband Rick of Wilson, NC. She also leaves behind her sister, Cora Foltz of Cranford, NJ as well as her grandchildren, Chris, Shana, Liam and Leanna. She is predeceased by her siblings, Ruth and Carl Billig. A graveside service will be held at 1:00 p.m. on Monday, October 17th at Lake Grove Cemetery in Holliston. In lieu of flowers, donations may be made to National Parkinson Foundation, 200 SE 1st St., Ste 800, Miami, FL 33131(Parkinson.org) or to ASPCA, PO Box 96929, Washington, DC 20090 (aspca.org) Arrangements are under the care of the Chesmore Funeral Home of Holliston, www.ChesmoreFuneralHome.com.