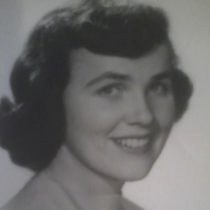 Mary Catherine (Shea) Perry of Holliston, Massachusetts died peacefully at her Fiske Street home on May 29, 2019 after a long illness. She was surrounded by her family and her German Shepherd dog, Yambo at the time of her death. Mrs. Perry was 88 years old. Mary Perry and her twin brother, Joseph L. Shea, II, were born in Milford, Massachusetts, at the old Milford Hospital, on July 19, 1930. Her brother Joseph was born first and she minutes later to the joyous surprise of her loving parents who were not expecting twins. She was the daughter of a respected schoolteacher and a renowned local lawyer, the late Mary V. and Joseph L. Shea, respectively.

Mrs. Perry was the valedictorian of her 1948 class at the Holliston High School and was a 1952 Phi Betta Kappa graduate of Boston University’s School of Liberal Arts where she met her husband, the late Brendan J. Perry. Mrs. Perry earned an A.B. Degree in Romance Languages from Boston University in 1952. Mr. Perry died in 2010 after his fifty-four year marriage to Mrs. Perry. Brendan J. Perry had been a lawyer for 50 years at the time of his death and was the founding partner of the Holliston law firm of Brendan J. Perry & Associates, P.C.

Mrs. Perry began teaching full time within the Holliston School system, where she taught for many years, while still a student at Boston University. She taught both Spanish and French at the High School level. She was well known in the Holliston teaching community as a superior teacher who demanded much from her students and received much in return. Many of her students entered High School language contests and achieved marked success even over private school entrants. Mrs. Perry attributed her teaching success to the great efforts of her students, the discipline which she maintained in her classroom and the collegiate caliber of the curriculum which she advanced.

Mrs. Perry was a great ambassador for education throughout the entirety of her adult life as she constantly extolled its virtues to literally thousands of students and parents alike. She truly loved children which accounts for her love of both teaching and Motherhood. In addition to Romance Languages, she taught CCD for a number of years and, when in her late 70’s, taught immigrants how to read during weekly sessions at the Milford, Massachusetts Public Library. Mrs. Perry was a lover of the Arts, in the broadest possible meaning of that term, and was an accomplished self-taught painter as well who specialized in seascapes and flowers. When her own children outgrew adolescence, she and her husband participated in the “Fresh Air Program” in Brooklyn, New York for several years. This program provided minority children, who lived in Brooklyn, New York and were between the ages of 11-14, with an opportunity to stay with a host family on Cape Cod for three week periods during the Summer months.

Mrs. Perry was an ardent lover of Cape Cod, where she spent many summers with her four children, Brendan M. Perry, Brian M. Perry, Christopher M. Perry and Terance P. Perry, and her husband. Mrs. Perry and her family enjoyed boating and fishing during their time at Cape Cod. Mrs. Perry’s favorite port of call was the Sand Bar right beside the “Green Can” in Waquoit Bay in East Falmouth. She also enjoyed Tarpaulin Cove on Naushon Island, Edgartown, Nantucket, Lake Tashmoo and Craigville Beach in Hyannis, MA. Each of her children survive her. She is also survived by her grandchildren, Brian M. Perry, Jr., Connor M. Perry, Quinn P. Perry and Alanna K. Perry, her daughter in law, Karen A. (Bonnet) Perry, numerous nieces and nephews and her beloved brother, Attorney Paul M. Shea from Holliston.

Visitation will be held on Friday, June 7th from 4:00-7:00 p.m. at the Chesmore Funeral Home of Holliston, 854 Washington St. www.ChesmoreFuneralHome.com A funeral mass will be celebrated on Saturday, June 8th at 9:00 a.m. at St. Mary’s Church of Holliston. Burial will follow in the parish cemetery.