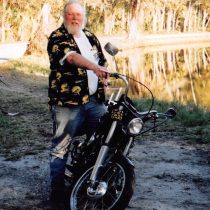 Mark Yockey, 70, of Holliston, passed away unexpectedly while on a long haul trucking job in Virginia. Born in Pittsburgh, Pennsylvania, he was the son of the late Frances Gail (Whalen) and Wilson Regis Yockey.

Mark was a 1968 graduate of University of Detroit High School and a 1973 graduate of Boston College, with a degree in English. After college, he worked for 30 years with North American Van Lines as a truck driver and also worked for 10 years there as a dispatcher and planner. He was currently employed as a truck driver at  KWL of Franklin. Mark was an avid motorcyclist and enjoyed camping, fishing, shooting and cooking. He took pleasure in collecting antique motorcycles, was a history buff and well read and versed in US and World History. He was well liked and his life was centered around his friends.

He is survived by his cousin, Rowene (Whelan) Clark of Greensboro, North Carolina as well as many friends.

A graveside service will take place on Monday, August 31st at 11:00 a.m. at Lake Grove Cemetery in Holliston. Arrangements are under the care of the Chesmore Funeral Home of Holliston, www.ChesmoreFuneralHome.com