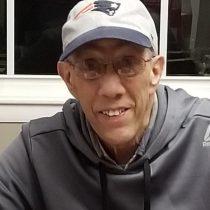 Mark Strasnick, beloved father, grandfather, brother, and friend, died peacefully in his sleep on Sunday, March 21, 2021.  He was 71 years old.  He spent his final days with his family by his side.

Born in Malden on November 10, 1949, he spent his childhood in Lynn and later lived in Beverly, where he raised his two children.  He moved to Ormond Beach, Florida later in his life and eventually returned to Massachusetts to be closer to his children and grandchildren, settling in Medway.

Mark graduated from Lynn Classical High School in 1967 and served in the Navy from 1969-1972.  He spent most of his working years as a baker, working at Broadway Pastry Shop in Chelsea and Boston Street Bakery in Lynn, both family businesses.  He is often remembered for his cake decorating skills.  The greatest joys of Mark’s life were his children and grandchildren.  He spent many hours coaching his kids’ soccer teams and these were some of the happiest moments of his life.  He was an avid New England sports fan, always loyal to the Patriots, Red Sox, Celtics, and Bruins.  Mark is remembered by his family and neighbors for always having his loyal dogs by his side: Maggie, Abby, and Sophie.

In lieu of flowers, donations can be made in Mark’s name to Forever Home Rescue New England.  Funeral arrangements will be held privately with his family and are under the care of the Chesmore Funeral Home of Holliston.