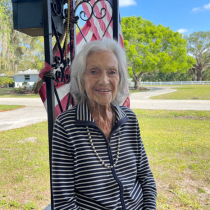 Marjorie Joan Burt (Sheehan) Morrison, born February 23, 1924, passed away peacefully in her sleep on December 6, 2022, while vacationing in Wolfeboro, New Hampshire. She was a resident of Englewood, Florida and a former resident of Holliston, MA.

Ms. Morrison was a graduate of New Bedford High School. When she finished high school, she moved to Boston and attended secretarial school. Next, Marjorie moved to Washington, D.C., where she worked for the war department during WWII. When the war ended, Marjorie moved back where she began her career as a fashion model and met the love of her life, Norman, who passed in 2012.

The couple, married in 1947, moved to Holliston where they quickly became involved in civic and religious projects. She was a founding member of “The Friendly Aid Society”, a charitable group helping those less fortunate. Together she and Norman helped to found St. Michael’s Espiscopal Church, where she devoted much of her time to church activities. The Holliston Historical Society also benefited from Marjorie’s volunteer and civic spirit. Ms. Morrison’s spiritual pursuits continued when she and Norman moved to Florida; as demonstrated by her active involvement in St. David’s Espiscopal Church in Englewood.

Marjorie is survived by her three sons, Bruce Morrison and his wife, Sandy and her daughter, Jen West, and Brian and Brett Morrison. Family members also include Cathy Morrison, granddaughter, Heather Donovan (Bryan and great-grandchildren, Ava and Conall), Richard Wood, Dr. Kenneth and Sandra Janes, Thomas and Sandy McKitterick, the entire Brown family, as well as several loved nieces and nephews. She is predeceased by her sister, Jacqueline Morris and her brother, William Sheehan.

Arrangements for a Spring burial are pending, where she will be interred alongside Norman at Massachusetts National Cemetery in Bourne, MA. If so desired, in memory of Marjorie, please do a good deed today or donate to your local hospice organization.