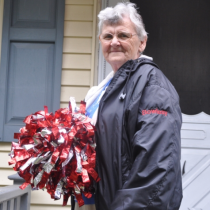 Margaret “Margot” Bowles, 90, of Holliston, passed away on Sunday, April 10, 2022. Born in Cambridge, MA, she was the daughter of the late Teresa (Brough) and Teddy Fraser. She was the wife of the late Michael J. Bowles Sr., who passed away in 2011.

Margaret, affectionately called Margot, was a resident of Holliston for over 70 years and was best known for her huge heart, her caring demeanor and her understated commitment to community service. She was  best known for being the “cafeteria mom” at the Placentino/Miller Schools; where she had been a fixture for over forty years.  At one time, she also worked as a school crossing guard.  She would make sure all the kids had their lunch, then put on her vest and help them cross the street. She was an avid lover of the New England Patriots, enjoyed making ceramics, member of the Guild, and an honorary cheerleader in Holliston. She was proud to be named Holliston’s Citizen of the Year in 2009. Most importantly, Margot loved her family and treasured time spent with her grandchildren.

A funeral will be celebrated on Thursday, April 14th at 11:00 a.m. at Saint Mary’s Church of Holliston. Internment will be held privately at a later date. A Mass in Margot’s name will be said on Saturday, May 28th at 7:30 p.m. at Saint Mary’s. In lieu of flowers, donations may be made to Timothy Daniels House-in loving memory of Margaret Bowles, 84 Elm St. Holliston, MA 01746. Arrangements are under the care of the Chesmore Funeral Home of Holliston.