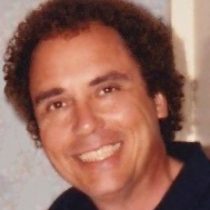 Louis Milton Cook, 71, joined His Lord on December 26, 2017 after fighting valiantly against Frontal Temporal Dementia.  He died in Wellesley, MA surrounded by his family.  His devotion to his family and his firm belief in God strengthened him in his struggle and ultimately gave him peace.

Louis was born to the late Reverend George W and Virginia Courtney Cook, an Assembly of God preacher and a nurse respectively in Birmingham, Alabama.  He was raised in Central Florida, graduating from Osceola High School in Kissimmee, Florida.  He lived in South Carolina for fifty years after leaving Florida.  He started his career selling and repairing Singer sewing machines. He then moved to WHSC 1450 AM radio station in Hartsville where he was a well-known salesman and on-air personality providing many laughs on a popular program he created, Trading Post.  He also covered many Hartsville and Butler High School football and basketball games. He graduated with a BS from Francis Marion College and a JD from the University of South Carolina School of Law.

His career as an attorney included being a city judge in Darlington, SC, North Myrtle Beach City Attorney, and private practice in litigation and real estate including many years in Cherry Grove, SC.  He was a member of Ocean Drive Presbyterian Church in North Myrtle Beach, SC. After retirement, he moved to the Boston area with his dog Carolina Girl to be closer to his daughter, Cherie and her family.

Louis loved living at the beach, photography, growing orchids and roses, travelling, his Boston Terriers, the Gamecocks, listening to music especially Andrea Bocelli and Ray Charles. He became an avid traveler, visiting Greece, Italy, England, France, Costa Rica and all over the US including Alaska and many trips to California.  He was generous to many and had a sparkling smile. He loved to make people laugh and never knew a stranger.  He was a wonderful father, brother, uncle and Papaw.  He is dearly missed by his loved ones, who celebrate the fact that he is at peace with his creator.

Funeral arrangements are being handled jointly by Chesmore Funeral Home in Hopkinton, MA and Merritt Funeral Home in Brooksville, Florida.  Louis will be buried at Brooksville Cemetery next to his mother and father after a family graveside service.