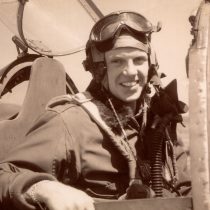 Lewis H. Benzon, age 96, of Shrewsbury and formerly of Hopkinton, died September 16, 2018. Born in Philadelphia, he was the son of the late  Lewis H. Benzon, Sr. and Sylvia (Broom) Benzon. He was predeceased in 1999 by his beloved wife, Eleanor (Harris) Benzon,  of 57 years, whom he met in a high school choir.

Lewis earned degrees from Temple University and Hofstra University. During WWII, while in training, he was appointed Cadet Commander of the 750 man cadet contingent. He served alone and unarmed as a P-38 reconnaissance pilot in the Ninth Air Force in Europe, becoming a flight commander. While in Germany, he co-wrote and directed the Air Force show “All Expenses Paid” with a cast of 40. He taught choral music for 32 years in Bensalem, PA, Malverne, NY and Ocean City, NJ, winning a national contest with his first chorus where one of the judges was Kate Smith. He was named “Man of the Year” for his work with students in Bucks County, PA, was chosen as a conductor of the Massed Men’s Chorus in Rochester, NY for national radio, and named a Master Teacher by his superintendent of schools. He touched the lives of countless students and enjoyed corresponding with many and hearing of their accomplishments. He was an avid saltwater fisherman, golfing duffer, and poker player. In retirement in Florida he volunteered with Meals on Wheels and at an Alzheimer’s facility. While living at Southgate retirement facility in Shrewsbury, he volunteered by visiting with patients in the nursing home and assisted living area. His best times were spent with his wife and family.

Services are being held privately and are under the care of the Chesmore Funeral Home of Hopkinton,www.ChesmoreFuneralHome.com Remembrances can be made to the Worcester County Food Bank, 474 Boston Turnpike, Shrewsbury, MA 01545.