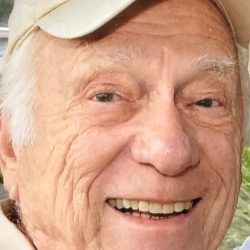 Lawrence L. Denker, 92, passed away peacefully on January 9, 2022. Known as Larry to his family and friends, he adopted the middle initial L. later in life because he had never been given a middle name. He worked for over 60 years as a Safety Engineer, and based on his life-long commitment to improving safety and work conditions in industries including the airlines and toy manufacturers, he earned the title of “Safety Man”.

Larry was born in Brooklyn, NY, son of the late David and Bertha Denker and brother to the late Norman Denker and Francis Peterson. It was also in Brooklyn where he met his first love and future wife, Phyllis Ruth Lerner. Soon after meeting, Larry and Phyllis moved to Baldwin on Long Island to begin their life together, raising their three children, Bradley, Sheri, and Stacey.  After his retirement in 2002, they moved to West Lake in Jackson, NJ where they became a part of a welcoming community. Larry was an amazingly selfless caregiver and provider who tended to Phyllis 24/7 allowing her to live a full life until her death in 2005. Larry and Phyllis were married for 50 happy years.

In 2007, Larry had the good fortune of meeting his girlfriend, Carole Goldstein. For the next fifteen years, they enjoyed sharing time with family and friends, traveling, singing, and dancing together. Frank Sinatra songs and the Lindy were among their favorites. Larry also loved model building and radio-controlled boats and spent many days on Lake Oscawana in NY with his children, grandchildren, and great grandchildren. Although the lake was an integral part of his life, around which many summers were centered, he never liked the water and never learned to swim. Nevertheless, he would venture into boats and even canoes at the urging of his family in a show of his dedication and commitment to them.

Larry was always there for those that needed him. He was loyal, dedicated to helping others, loving and generous. He will be terribly missed. He is survived by his three children whom he loved dearly; Brad Denker, Sheri Matarese and Stacey Tompkins, his daughter-in-law, Mary, and sons-in-law, William Matarese, MD and Mark Tompkins. He also leaves behind eight grandchildren; Melissa Fenterstock, Andrew Matarese, Brendan Denker, Jennifer Denker, Mackenzie Denker, Kevin Tompkins, Justin Tompkins, and Michael Tompkins, as well as two great grandchildren, Parker and Blaire Fensterstock.

Funeral services are being held privately with family. Arrangements are under the care of the Chesmore Funeral Home of Holliston. In lieu of flowers, donations may be made to the National Kidney Foundation (30 East 33rd Street, New York, NY, 10016), or the Michael J. Fox Foundation (Donation Processing, The Michael J. Fox Foundation, P.O. Box 5014, Hagerstown, MD 21741-5014; 1-800-708-7644) or VNA Hospice and Palliative Care (www.vnacare.org/donors)