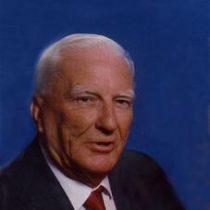 Lawrence B. Connelly, 86, much loved husband of Virginia (Barber) Connelly for 61 years died peacefully at his Sturbridge home on Sunday April 20 with his family by his side. Born in Newton on the first day of spring in 1922, he was the son of John and Elizabeth (Herlihy) Connelly.

Mr. Connelly was a veteran of World War II, serving for five years in the American Theatre, including Columbia, Puerto Rico and Martinique. He was Postmaster in Sherborn from 1965-1972 and in Holliston 1972-1984. Lawrence was the member of a number of Postmaster organizations, serving as an editor of the Bay State Postmaster publication for several years.

Lawrence, a resident of the town of Sherborn for more than forty years, was a life member of the Sherborn Fire Association. Served on the Dover-Sherborn Regional School Committee, the Sherborn bypass committee, the Sherborn Lions Club, Treasurer of Perceptual Education and Research Committee (PERC), WEBELOS Scout Master and Former Commander of the American Legion Post 47 of Holliston. Larry was appointed by the Governor of Kentucky to the honorable order of the Kentucky Colonels. He was a communicant of St. Theresa’s church in Sherborn and St. Christopher’s parish in Brimfield.

In addition to his wife, he is survived by his children: Marc and his wife Paula of Holliston, Susan and her husband Ed Rose of Oxford, Mass, Melissa of Nashua, NH, LTC Peter and his wife HyonHui of Bristow, VA, and Amy of Hillsborough, NJ. He also leaves six grandchildren: Luke, Kitty and Emily Dawson, Jack and Sarah Connelly and Alexandra White, all of whom brought much pleasure to his later years.

Also surviving are his brother John and his wife MaryLou, a sister, Kathleen King as well as several nieces and nephews. He was predeceased by his sister, Elizabeth Knapp.

Lawrence lived and enjoyed a full life with his wife. He was respected and loved dearly by his family and esteemed by his peers. He was a man whose handshake was his word, and his friendship was everlasting.

Visitation will be from 4:00 to 8:00 pm on Thursday, April 24, 2008 at the Chesmore Funeral Home 854 Washington St. (Rt. 16) Holliston www.ChesmoreFuneralHome.com. A Funeral Mass will be held on Friday at 10:00 am in St. Theresa’s Catholic Church 35 South Main St. in Sherborn. Burial will follown at Pine Hill Cemetery in Sherborn.
In lieu of flowers, donations may be sent to the Special Olympics of New Jersey 3 Princess Rd Lawrenceville, NJ 08648.