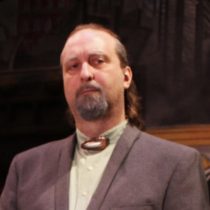 Kent Lawrence McNeillie, 51, of Medway and a former longtime resident of Harrisburg, Pennsylvania, passed away Thursday, April 2, 2020 after a courageous battle with colon cancer. Born in Red Bank, New Jersey, he was the son of Coleene (McNaughton) McNeillie of Medway and the late Charles “Chuck” McNeillie.

A 1986 graduate of Medway High School, Kent then went on to attend Messiah college in Mechanicsburg,  Pennsylvania. He then worked for Highmark Insurance for over 18 years. At the time of his death, Kent was employed at Home Depot in Bellingham.  One of his greatest pleasures was acting. Kent was involved in many performances and was a main actor at the Gamut Theatre Group in Harrisburg, PA. He worked hard not only to give his characters the full color and range of humanity, but he also made sure that his fellow cast members were always held in the best light, both onstage and off. His special attention was always given to the young people in the shows, and he was always a friend and mentor to them. So many kids in Harrisburg can say that they had their first experiences in theatre working alongside, and learning from this abundant soul. Kent’s manner was always free and easy, with a good word and a heartfelt hug whenever either was needed. Kent also was very handy with the tools, and many of the sets were so beautifully realized because of the sweat and attention of this gentle giant of a man. Gamut Theatre is 28 years old now, and Kent was there nearly from the beginning. A lot of what has been achieved over the years would not have happened without the love and dedication of this fine artist and good friend. He is missed so much already, and hearts are full, cherishing all the gifts he gave. He created the group, Broadway Bound where up and coming actors would entertain those in hospitals, schools and nursing homes. He directed many high school musicals and had a love for Broadway. He also spent many years volunteering at The Caring Place in Harrisburg. Goodnight, Sweet Prince. May flights of Angels sing thee to thy rest.

A memorial service will be held at a later date at First Baptist Church in Holliston. In lieu of flowers, donations may be made to Gamut Theatre Group, 15 North Fourth St. Harrisburg, PA 17101 or https://www.gamuttheatre.org/