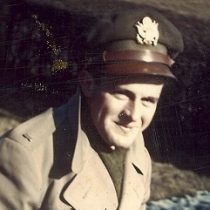 Kenneth K. Webb, 86, of Marlborough, formerly of Yarmouth, Phoenix, Arizona, and Framingham, died Sunday, May 9th, 2010.
Born in East Palestine, Ohio, he was the son of the Late Frank and Alice Webb.
Ken graduated from Alliance High School in 1941 and served in the U.S. Army in central Europe during WWII. He was commissioned at the age of 19, as a 2nd lieutenant from the Officer’s Candidate School at Fort Sill, Oklahoma, the youngest officer in the history of the school. While serving as a forward observer directing the fire of an artillery unit, Ken was awarded the Bronze Star and Purple Heart, and received a battlefield promotion to 1st Lieutenant. After the war, Ken received a B.A. from Case Western Reserve University in Cleveland, Ohio, and attended the Cleveland Institute of Art.

An employee of the Carling Brewing Company, Ken was relocated from Cleveland to Framingham in 1956 when Carling opened their new brewery in Natick. Ken served as the Production Manager until 1976 when he was relocated to Phoenix, Arizona, again serving as Production Manager until his retirement.
Ken and his wife Gloria moved back to Massachusetts in 1997, and lived in their home on Hemeon Drive in Yarmouth until recently.

Ken was the father of the late Jo Ann Webb, and is survived by Gloria, his wife of 65 years, his daughter Judy Gallagher and husband Joe of Littleton, his son Dr Ken Webb and wife Julie of Holliston, his daughter Devette Russo and Bob Pfeifer of Hopkinton. He is also survived by his grandchildren; Bryan Gallagher, Erin, Brendan, Christopher and Matthew Webb, and Joshua Russo and his wife Dr. Marlene Gubata.

Ken is the brother of Frank Webb of Ohio, Hazel Webb of California, and the late Hilda Wheatley of Ohio and Betty Monaco of Arizona.
There will be a private ceremony and burial at Arlington National Cemetery on June 9th.

In lieu of flowers, donations may be made to the Pan-Massachusetts Challenge, an annual bike-a-thon that raises money for life-saving cancer research and treatment at Dana-Farber Cancer Institute. Donations can be made on line at www.PMC.org (donate to rider Devette Russo), or by check to Pan Mass Challenge, PO Box 668 Hopkinton, MA 01748.