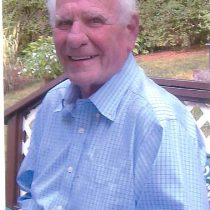 A Navy veteran of both WWII and the Korean wars, Joseph had served onboard the USS Damato. He had retired from Dennison Mfg. Co. in the mid 1980’s and was an avid Patriots and Red Sox fan who rarely missed a game.

He is survived by 1 son; Joseph Armatruda III of Rutland, 1 daughter; Kathleen Roberts with her husband, Ken and their son Christopher all of Franklin. 4 siblings; Patrick Armatruda, Josephine Butillo, Jenny Slusaw, all of Bethlehem, PA and Anne Merwarth of FL. Besides his wife, he is predeceased by several other siblings, and his 13 year old granddaughter; Caileigh Armatruda

Visitation will be at the Chesmore Funeral Home 854 Washington St. (Rt. 126) on Thursday from 4:00 to 8:00 pm. www.ChesmoreFuneralHome.com A Funeral Mass will be held on Friday at 9:00 am in Saint Mary’s Church of Holliston. Burial will follow in St. Mary’s Cemetery. Donations may be made in his memory to the charity of ones own choice.