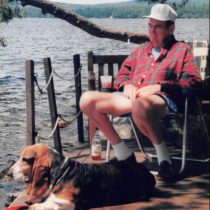 Burial to follow the service in Lake Grove Cemetery in Holliston

John Victor Paquette, 84, a 57-year resident of Holliston, passed away at Newton Wellesley Hospital on Sunday, December 11, 2022. Born in Manchester, New Hampshire, he was the son of the late Agnes (Healy) and Anthony Paquette. He was the beloved husband of 62 years to Sandra (Dean) Paquette.

John was a 1955 graduate of Manchester Central High School. He earned his bachelor of science degree at UNH, class of 1959. He honorably served for 20 years with the New Hampshire Air National Guard. John also worked for over 30 years at Commercial Union in commercial risk appraisals. He was active in many local town and state politics and was on local building committees.

John’s love for his family was rivaled only by his passion for UNH Hockey and his beloved basset hounds, both of which he would talk about with pride and enthusiasm. He enjoyed making model airplanes and was known to gift his young granddaughters with custom-made dollhouses.  All were welcome in his home without having to knock first, unless, of course, you openly disliked basset hounds or UNH Hockey, in which case all bets were off.

Along with his wife, John is survived by his three children, Dianne (Jack) McCarthy of Holliston, John Paquette (Kim Walker) of Holliston, and David (Catherine) Paquette of Wellesley. He is also survived by his loving grandchildren, John (Laura), Samatha, Jack, Julie, Arden, Emerson and Kate, as well as his two great-grandchildren Aubrey and Johnny. He also leaves behind many cousins.

A funeral service will be held on Friday, December 16th at 10:30 a.m. at the Chesmore Funeral Home of Holliston, 854 Washington St. Burial will follow in Lake Grove Cemetery. In lieu of flowers, donations may be made to Caretenders of Westborough, 287 Turnpike Rd Suite 265, Westborough, MA 01581.