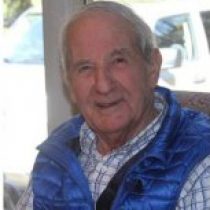 John Verrochi, 91, died peacefully surrounded by family on November 19, 2015. John grew up in Walpole, graduated from Yale University (1945), served in the Navy, and became a stockbroker. He began his career with Merrill Lynch in Boston, managed an office with Francis I. Dupont in Rutland, Vermont and finished with Paine Webber in Boston before retiring in Brewster.

John was known for his kindness, great sense of humor and quick wit that put a smile on everyone’s face. A devoted husband, he was married 54 years to Virginia Crehan.
He is survived by his four children: John Jr., of San Francisco, CA, Mark (Lisa) of Hopkinton, MA, Virginia (Charlie Hampson) of Seattle, WA, and Matthew (Patricia) of Mount Kisco, NY, and six grandchildren, whom he adored.

A Mass will be celebrated Friday, December 4th, at 11:00 a.m. at St. John the Evangelist Church, 20 Church Street, Hopkinton, MA.
In lieu of flowers, the family asks that you consider a donation to the Alzheimer’s Association in loving memory of Virginia. Funeral arrangements are under the direction of the Chesmore Funeral Home, 57 Hayden Rowe St., Hopkinton, MA. www.ChesmoreFuneralHome.com