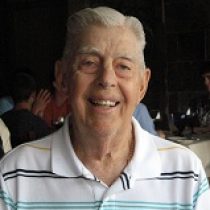 John William Rossini, 84, lifelong resident of Holliston, died peacefully following a brief illness at Metrowest Medical Center in Framingham on Tuesday, March 29, 2011. He was born March 25, 1927 to the late Joseph and Genevieve (Trotta) Rossini and graduated from Holliston High School.

John “Sonny” served in the U.S. Navy during WWII. On March 25, 1951 he was united in marriage to Barbara A. (Fiske) Rossini of Ashland. Sonny and his three brothers, Walter, Beno and Alex owned and operated “Walter’s Dairy” at East Holliston corner from 1940 until 1984. The establishment was well known for its family atmosphere, excellent food and homemade ice cream. Following the closing of the business, he worked with his son Joseph at J.R. Construction of Holliston until his retirement in 2004.