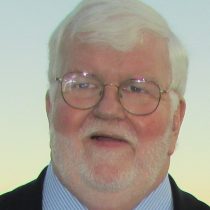 John “Pete” Meloski, Jr., 72, of Medway, passed away Sunday, April 19, 2020 at Mass General Hospital in Boston. Born in Boston, he was the son of the late Esther Poch Meloski and John Peter Meloski, Sr. He was the husband of 40 years to the late Deirdre “Dee” Burns Meloski who passed in 2015.

Pete was a graduate of Dedham High School and earned a degree from Wentworth Institute of Technology. He married Dee on July 28th, 1974. Pete’s career spanned forty years in the computer hardware industry. He began work at Data General, but spent most of his career at Digital (later acquired by Intel), finally retiring in 2013. Pete enjoyed vacationing on Cape Cod, where he formed his love of “melt-aways,” fried clams and ice cream sundaes. He loved movies, especially the Star Wars franchise, enjoying them both in the theater and from his favorite recliner.  He was a super fan, attending thousands of volleyball, basketball, football, and soccer games played by both Medway youth sports and Medway high-school, Wheaton College and St. Mark’s School. He was also an avid follower of Boston’s professional sports teams and clearly couldn’t bear to see Tom Brady play in a different uniform!

Pete is survived by two children; Michael Meloski and his wife, Marisa of Jamaica Plain, and Caitlin Meloski of Medway. He also leaves behind his sister, Gail Patterson and her husband, Gary of Norfolk and their two kids, Sarah Patterson of New York, NY and Scott Patterson of Norfolk. He is predeceased by his nephew, Sean Patterson.

Funeral services will be held at a later date due to Covid 19 restrictions and are under the care of the Chesmore Funeral Home of Holliston, www.ChesmoreFuneralHome.com In lieu of flowers, memorial gifts in Pete’s memory can be made to the Deirdre Meloski Memorial Scholarship, 2 Diane Dr, Medway, MA 02053.