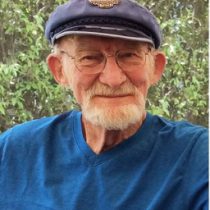 John L. “Babe” Johnson, 96, of Holliston, passed away August 7, 2018, at Genesis Healthcare Center in Milford. Born in Holliston and a lifelong resident, he was the son of the late Bella (Malta) and John F. Johnson. He was the loving husband of Dorothea (Moffatt) Johnson of Holliston.

He proudly served in the Navy submarine service during WWII, as Electrician’s Mate 2nd Class, with 13 war patrols to his credit. While in the service, John attended Purdue University. He was co-owner of Warley Electrical Co. in Natick. John was a lover of classic cars and was a member of the Central Mass Model T Club, as well as the V8 Club. He gave back to his community, serving in the Fire Department, and later as Wiring Inspector in Holliston.

Visitation will be held on Sunday, August 12th from 1:00-3:30 p.m. at the Chesmore Funeral Home of Holliston, 854 Washington St. (Rt.16) www.ChesmoreFuneralHome.com A service will follow visitation in the funeral home at 3:30 p.m. A graveside service will take place on Monday, August 13th at 9:00 a.m. at Lake Grove Cemetery, Highland St. Holliston. In lieu of flowers, donations in John’s name may be made to Dementia Society of America, PO Box 600, Doylestown, PA 18901 or dementiasociety.org