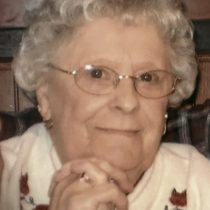 Joan A. Gagnon, 90, of Holliston, passed away on Wednesday, November 23, 2022 at Metrowest Medical Center in Framingham. Born in Van Buren, Maine, she was the daughter of the late Antionette (Vaillancourt) and Clifford Letalien. She was the wife of Gerald H. Gagnon, with whom she just celebrated 75 years of marriage.

Joan worked as a nurse’s aide at the former Paul Charles Manor Nursing Home in Framingham and also as a seamstress making military hats at the Bancroft Military Cap Company in Framingham.

Besides her husband, Joan is survived by two children, Donald Gagnon and his wife, Phyllis of Van Buren, Maine and Maxine Jenkins of Bellingham. She also leaves behind 5 grandchildren, James, Michael, Joanne, Katheryn and Steven; and 9 great-grandchildren, James, Jessica, Shawn, Hannah, Trevor, Spencer, Wyatt, Ashley and Tyler. She is predeceased by her siblings, Regional, Albert, and Cecile.

Funeral services are being held privately and are under the care of the Chesmore Funeral Home of Holliston. In lieu of flowers, donations may be made to St. Jude Children’s Research Hospital, stjude.org or 501 St. Jude Place Memphis, TN 38105