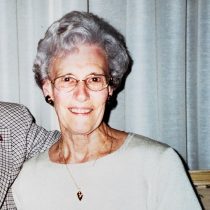 Jeanne Marguerite Hedberg, 89, of Cherryfield, ME and a former lifelong resident of Holliston, MA died peacefully surrounded by family on May 8, 2019.  Born in Webster, MA, she was the daughter of the late Rosa (Genest) Malboeuf and Joseph Malboeuf. She was the wife of 60 years to the late Robert A. Hedberg.

Jeanne was a 1947 graduate of Ashland High School.  She began work as a Bell Telephone operator after high school and became a Verizon retiree in her 60’s. She was an avid scrabble player and led a local chapter of the National Scrabble Association. She is survived by her son Ernest and his wife, Lisa of Cherryfield, ME, her daughter, Margaret Francis and her husband, James of Sterling, MA;  as well as many grandchildren and great grandchildren who loved her dearly. She is predeceased by her son, Richard, her sister, Alice Iarussi and her brother, Herman Malboeuf.

Burial services will be private.  In lieu of flowers, spiritual bouquets and Masses may be offered for the repose of her soul. Arrangements are under the care of the Chesmore Funeral Home of Holliston, www.ChesmoreFuneralHome.com