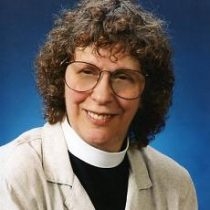 Jeanne was an Episcopal Priest who celebrated at All Saints’ Episcopal
Church in Staten Island, NY, St. Paul’s Episcopal Church in Hopkinton,
MA, and was the Rector at Grace Episcopal’s Church in Port Jervis, NY.
Prior to being called to the priesthood, Jeanne taught speech and
communications at the University of Guam and Pace University. She was also
on the faculty of Wagner College on Staten Island, NY for many years and
taught voice and diction and theater and was the costumer for the theater
program at Wagner.

Jeanne is survived by her son Norman Hendricks and his wife Liz, of
Saugerties, NY, her daughter, Liz Hutto and her husband David of
Hopkinton, a sister, Nancy Swift Hennessey of Raleigh, NC., 4
grandchildren, Adam and Rebekah Hendricks, Annika and Lina Hutto, and a
niece, Jennifer Swift Bennett of Raleigh, NC.

A funeral will be held at 4:00p.m. on Thursday, January 28, 2010 at St.
Paul’s Episcopal Church in Hopkinton. Arrangements are From the Chesmore
Funeral Home of Hopkinton, www.ChesmoreFuneralHome.com In lieu of
flowers, donations in her memory may be made to either The Smile Train,
28th Floor 41 Madison Ave. NY, NY. 10010 or Heifer International, 1 World
Ave. Little Rock, AR. 72202