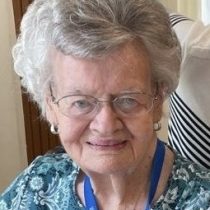 Jean (Burroughs) Rawson, 99, of Milford and formerly of Holliston passed away at Milford Regional Hospital on Tuesday, November 15, 2022. Born in Boston, she was the daughter of the late Edna (Smith) and Harry Burroughs. She was the wife of over 65 years to the late Donald “Bud” Rawson.

Jean was a graduate of Sherborn High School and Lasell College. She worked at Framingham Union Hospital as a medical secretary before raising her family and then helped manage her husband’s plumbing and heating business. Jean was active in Women’s Club, Child Study, Cub Scouts, Girl Scouts, and Bridge Club, but most of all enjoyed spending time with family and friends. In later years, she resided at Whitcomb House Assisted Living, keeping her mind sharp reading, doing crossword puzzles and exploring the internet on her Ipad.

Jean leaves three children, Donald and his wife, Lorraine of Beaufort, SC, Jeremy and his wife, Carla of Marlboro, and Anne Hatch and her husband, John of Medway. She also leaves behind her beloved grandchildren, Jeffrey Rawson, Christopher and Allison Hatch, and step-grandson, Joshua Victor, and three nieces. Jean was sister to the late Shirley Walker and Richard Burroughs.

A private service will be held with family. In lieu of flowers, donations may be made to the American Heart Association. Arrangements are under the care of the Chesmore Funeral Home of Holliston.