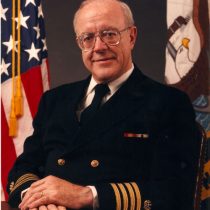 Jared Hopestill Adams, 83, departed this life on November 15th after a brief  illness. The son of Robert Haviland Adams and Dorothy Leland Adams, he was a life-long resident of Holliston.

Jerry graduated from Phillips Exeter Academy, Princeton University and earned  his law degree from the University of Pennsylvania. His legal career began with his active service in the JAG Corps of the Navy, where he rose to the rank of Captain in the Navy Reserves. After leaving the Navy, he joined Liberty Mutual Insurance Company and then became senior counsel for the St. Paul Fire and Marine Insurance Company. In 1986, he became a country lawyer, opening a joint practice with Sheldon Pitchel, and then managing his own law practice. He practiced law for over 50 years in all court jurisdictions of which he was a member, including the U.S. Supreme Court.

Jerry loved Holliston and believed in service to his community, part of a family tradition. His father was on the Finance Committee for 30 years and was given the honor of having the Middle School named after him. His grandfather and great-grandfathers were State Representatives. He was elected to the Finance Committee and served for 12 years, 4 years as chairman.  He won election to the Board of Selectmen for 1 term. He was also appointed to the Sewer Study Committee and elected to the Water Board. Jerry was always up for a vigorous debate about town government or other issues of the day.

He was a member of the Congregational Church, the Holliston Historical Society,  Mt. Hollis Lodge and was Chairman of the Board of the Lake Grove Cemetery Committee.  Jerry found great pleasure in reading and traveling. When at home you could find him in his recliner reading his favorite books. He took up weaving late in life and crafted many items for his family. He loved to travel both in the U.S. and abroad. One of his favorite places was the Grand Canyon. He enjoyed getting together with his brothers in Las Vegas, sailed on several cruises, and visited many European countries.  In his capacity of Justice of the Peace, he married many couples in different locations. He proudly joined his son and daughter-in-law in holy matrimony on the steps of the J.F.K. library.

Jerry leaves behind his wife of 53 years Sheila, his daughter Andrea, his son Jared Paul, his daughter-in-Law, Lisa Marie Adams, his grandchildren, Samantha and Zackary, and many nieces and nephews.

Visitation will be held on Friday, November 22nd from 4:00-7:00 p.m. at the Chesmore Funeral Home of Holliston, 854 Washington St. www.ChesmoreFuneralHome.com A funeral service will take place on Saturday, November 23rd at 11:00 a.m. at the First Congregational Church of Holliston. Burial will follow in Lake Grove Cemetery. In lieu of flowers, donations may be made to the Friends of the Holliston Public Library, 752 Washington St. Holliston, MA 01746 and the Shriners Hospital for Children, shrinershospitalsforchildren.org