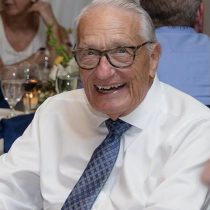 Jim joined the US Navy and served during the Korean conflict from 1950-1954. He
sailed on the USS Yorktown and the USS Oriskany (“Mighty O”). After returning from Korea, he earned his economics degree from the University of Detroit. He went on to have a career at Empire Electric, where he worked with his father-in-law and brother-in-law for many years. He was civically involved in local politics and served on the Board of Education in Bethel, CT.

Jim was an avid sailor his whole life, learning to sail with his family on Lake Huron in Michigan. After he retired, he sailed from Maine to South America and back. Jim also sailed up the Hudson River to the Great Lakes and down the Mississippi to the Gulf of Mexico on his schooner, Memory. While he was living on the boat, he took side trips to South America. He has cruised up the Amazon to Manaus and around the tip of South America, Cape Horn. In South America, Jim adventured on a 5-day trip to Angel Falls which included at 4-day ride in a dugout canoe. Along the way he was joined on Memory by great people who would meet him in a faraway country and sail with him for a few weeks at a time. He was fortunate to be able to call many of those people friends to this day. He logged over 16,000 miles on his schooner, Memory. After sailing, he became a motorcycle enthusiast in his seventies and was an active member of the FL-1H Gold Wing Road Riders Association Motorcycle Club and rode over 300,000 miles. He rode until he was 91.

He is survived by three children, James R. Mog and his wife, Joan Brodhead of Paoli PA, Lisbeth A. Mog and her wife, Susan Patterson of Holliston, MA, Margaret R. Brady of Charlotte, NC, and his former spouse Beverly Jensen (Mog) of Estero, FL. He also leaves behind his grandchildren, Andrew Mog and his wife Jessica Malley and K. Edward Mog, Nicolas and Benjamin Patterson, Matthew Brady and his wife, Melissa, Megan O’Connor and her husband, Timothy and Timothy Brady and his wife, Kristen. He is predeceased by his sister Marianne Mog and son-in-law, John Brady.

A private burial is planned at the Massachusetts National Cemetery – Bourne, MA. In lieu of flowers, donations may be made to: Kindred Hospice, 130 Rumford Ave. Suite 211 Auburndale, MA  02466 or to https://app.etapestry.com/onlineforms/KindredatHomeFoundationInc/KAHF.html