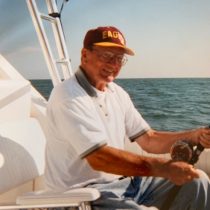 *Please note, Mr. Fitzgerald passed away March 24, 2021. We had to put a recent date to bring his obituary to the top of our page. His service is now announced.

James Patrick Fitzgerald Sr., 86, of Humarock and formerly of South Weymouth, MA, passed away on Wednesday, March 24, 2021. Born in Boston, he was the son of the late Mary Kate (Sullivan) and Patrick T. Fitzgerald. He was married to the late Ellen (Kilroy) Fitzgerald.

Jim grew up in Dorchester, MA and was a 1955 graduate of Boston College. A Lieutenant in the Navy, Jim served as a Navy Pilot where he flew a P2V Neptune aircraft.  He worked for many years as Vice President in Hospital Administration at Brockton Hospital. He was a lifetime member of the Marshfield Yacht Club and attended St. Anne’s Parish in Marshfield. Jim was extremely proud of his Dorchester roots and his Irish Heritage.

During his long work tenure, Jim was dedicated to supporting the nursing staff at Brockton Hospital, whom he held in highest regard. Throughout his years, he enjoyed fishing and lobstering off the coast of Scituate, swapping stories with friends at the Marshfield Yacht Club, and taking generations of family water skiing on Monponsett Pond in Halifax, MA. To all who knew him, no visit with Jim was ever complete without some quick witted one-line humor, a glass (or two) of cold beer, and the backdrop of Irish music crackling on a portable radio.

Funeral mass announced: Friday, June 25th 10:00 a.m. Saint Ann by the Sea, 591 Ocean St. Marshfield, MA. Livestream available at www.stanns.net Arrangements are under the care of the Chesmore Funeral Home of Hopkinton. In lieu of flowers, please consider a donation to your local food pantry.