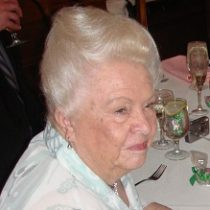 Holliston-
Jacqueline Seeley Sullivan passed away peacefully on October 2, 2010. She is survived by her son M.Scott Sullivan, and his wife Linda of Northborough, MA and her son Frank Seeley Sullivan of Martha’s Vineyard. She was the grandmother of Corinne Sullivan Uliano and her Husband Joe of Methuen, Leah and Morgan Sullivan of Northborough, and Franks daughter Courtney Sullivan Luce and her husband David of North Carolina. She had one great granddaughter Jayden Luce of North Carolina.
Jacqueline was born in Newton Ma and graduated from the Catherine Gibbs Business School. She was an accomplished singer and performer in her youth. She was an Air Force veteran of the Korean War and sang in the Air Force Choir. After leaving the service she worked for Liberty Mutual in Natick MA, and she was the Animal Control Officer for the town of Holliston. She then worked as a bookkeeper for the Natick Labs for over 20 years.
Jacqueline was a fan of the ocean and particularly loved trips to Rockport with her granddaughters. She loved animals and took in many hard to manage and abused animals to care for them.

Calling hours will be on Friday from 5:00-7:00, October 8,2010 at the Chesmore Funeral Home, 854 Washington Street, Holliston MA. Burial will be at the family’s convenience. The family request that instead of flowers a donation can be made in her name to the Cancer Society of America.