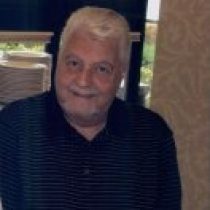 Jack Alessi, 73, of Franklin and formerly Holliston, passed away
Saturday, July 20, 2013 at Mass General Hospital. Born in Boston, he is
the son of Don Alessi of Hyde Park and the late Alice (Frascilla) Alessi.
He was the husband of the late Dorothy Ann (Cummings) Alessi.

Jack was a singer in the Trio “3 Swingin’ Tenors” and was a member of the
Natick Elks. Besides his father, he is survived by 5 children, MaryBeth
Cuomo (Ron) of Bellingham, Kristen Alessi (Joe) of Holliston, Laurie
Tominsky (Sebastian) of RI, Tony Alessi (Lauren) of Holliston, Michael
Alessi (Liamarie) of Holliston; 8 grandchildren and 1 great-grandchild; a
loving companion, Peg McGuire of Franklin and her children and
grandchildren.

Visitation will be held on Tuesday, July 23rd from 5-8p.m. at the Chesmore
Funeral Home of Holliston, www.ChesmoreFuneralHome.com. A 10:00a.m. mass
will take place on Wednesday at St. Mary’s Church of Holliston. Burial
will be held at a later date. In lieu of flowers, donations may be made to lls.org (LLS Chapter in Natick, MA – 9 Erie Dr, Suite 101) or MGH BMT Discovery Fund, Mass General Development Office, 165 Cambridge St, Ste 600, Boston, MA 02114