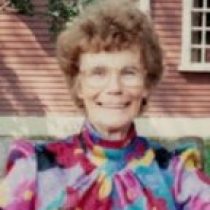 Irene M. Riley, 91, a long-time resident of Hopkinton, died July 18, 2015 at St. Patrick’s Manor in Framingham, after a lengthy illness.

Born to Thomas and Anna (Meighan) McKeon, Irene grew up in Marlborough and graduated from St. Anne’s Academy in 1941. In 1945, she graduated from Salem State (Teachers’) College with a Bachelor’s degree in business education. She began her teaching career at Sudbury High School until she married William A. Riley in1948 and raised four children. She resumed her teaching career, initially at Becker (Junior) College. Soon thereafter she earned her Master’s degree in business from Framingham State College and joined the faculty at Framingham South High School, where she taught from 1963 until her retirement in 1990. She was a founding member of the Whitehall Insurance Agency and was a broker there until her retirement in 2002.

She is survived by four children, Ruth Sagar and her husband Dean, Joan Widmayer and her husband Kurt, Daniel Riley, Rita Riley and her partner Carol Norton; nine grandchildren, James and his wife Kristen, William, Katharine, and Jacqueline Sagar, Zachary and Rebecca Widmayer, Taryn Delaney and her husband Joseph, William and Sean Riley; and five great grandchildren, Elizabeth (Ella), Charlotte and Luke Sagar, and Ashlyn and Channing Delaney. Her husband William of Hopkinton and her sister Anne Jefferson of Danvers predeceased her.

Arrangements are entrusted to the Chesmore Funeral Home of Hopkinton, 57 Hayden Rowe St. www.ChesmoreFuneralHome.com Visitation will be held on July 23rd from 5 to 7 p.m. A Funeral Mass will be offered for her at St. John the Evangelist in Hopkinton on July 24th at 11:00 a.m. Burial will follow in St. John’s Cemetery. In lieu of flowers, donations may be made to Hopkinton EMS, 73 Main St. Hopkinton, MA 01748 or to Friends of the Hopkinton Senior Citizens, 28 Mayhew St. Hopkinton.