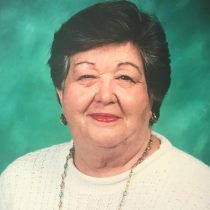 It is with deep sadness that we announce the passing of Ileana Fuertes Bachman at Lowell General Hospital, Lowell MA, on April 26th, 2020.  She was 86.

Ileana was the daughter of Luis Fuertes and Ana Pasarell.  Born July 8, 1933 in San Juan, Puerto Rico, she was the eldest of four children and was raised with three younger brothers.  Ileana studied at Sacred Heart in Newton MA during her high school years and then returned to Puerto Rico to earn a Degree in Mathematics with a minor in Education and also Art at Colegio del Sagrado Corazón and later worked as a Math teacher.  In 1956, she married Andres Gustavo Bachman and lived in Puerto Rico until 1979 when their family moved to Holliston, MA.  Once in Massachusetts, she continued teaching and then later retired.  In 2005, she and Andres made another daring move and re-located to Maryville, TN to enjoy their retirement in the peaceful mountains.  When Andres passed in 2015, she moved back to Massachusetts to be closer with her family.

Ileana, also known as Nana to her friends and Pica to her grandchildren was very passionate in politics, reading, art, and listening to classical music.  She loved fiercely and fought with conviction for what she believed in.  Nana was a strong advocate for education and learning, especially during the times where women’s rights were being fought for.  She was a faithful servant of God and a pioneer member of the Opus Dei.  She attended many Women’s Retreats at Arnold Hall, Pembroke MA where she inspired other women to have stronger relationships with our Lord.  Ileana will be remembered for travelling to many different places, enjoying new surroundings and would bring along anyone that would want to join her. She leaves behind many stories of her life, her family’s legacy, and most importantly a large and beautiful family.

Nana will be sadly missed but we have peace and serenity knowing that she is now at her destination, the gates of Heaven where she is certain to have been greeted by her loved ones and embraced by the glory that is God’s son.

A private graveside service will take place at St. Mary’s Cemetery. In lieu of flowers, donations in her memory may be made to Cedar Wood Foundation http://www.cedarwoodfoundation.org/giving-opportunities Arrangements are under the care of the Chesmore Funeral Home of Holliston, www.ChesmoreFuneralHome.com