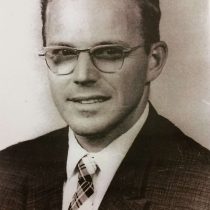 Herbert (Herbie) P. Holbrook Jr. 86, of Westborough and formerly of Hopkinton, passed away Monday, September 25, 2017. Born in Vermont, he was the son of the late Viola (Hemingway) and Herbert P. Holbrook. He was the husband of 59 years to Charlotte (Ward) Holbrook of Westborough.

Herbert was formerly employed with Alan S. Brown Co. in Brattleboro, VT, then Worcester Telegram & Gazette and Digital. He was a famed Class A ski jumper for over 35 years. He was admitted to the American Athletic Association for the deaf in 1964. Herbie was an ardent fisherman in Worcester County and won numerous awards in Massachusetts. He was a member of Faith Community Church in Hopkinton.

Besides his wife, he is survived by two sisters, Margie Wetherell and her husband Rodney of Johnson City, TN and Shirley Winningham and her husband Cleo of Bangor, ME. He is predeceased by a sister, Sheila Sherman.

A funeral service will take place at 12:00p.m. on Friday, September 29th in the Chapel at Faith Community Church in Hopkinton. In lieu of flowers, donations may be made to Deaf Missions, 21199 Greenview Rd. Council Bluffs, IA 51503 or deafmissions.com.  Arrangements are under the care of the Chesmore Funeral Home of Hopkinton. www.ChesmoreFuneralHome.com